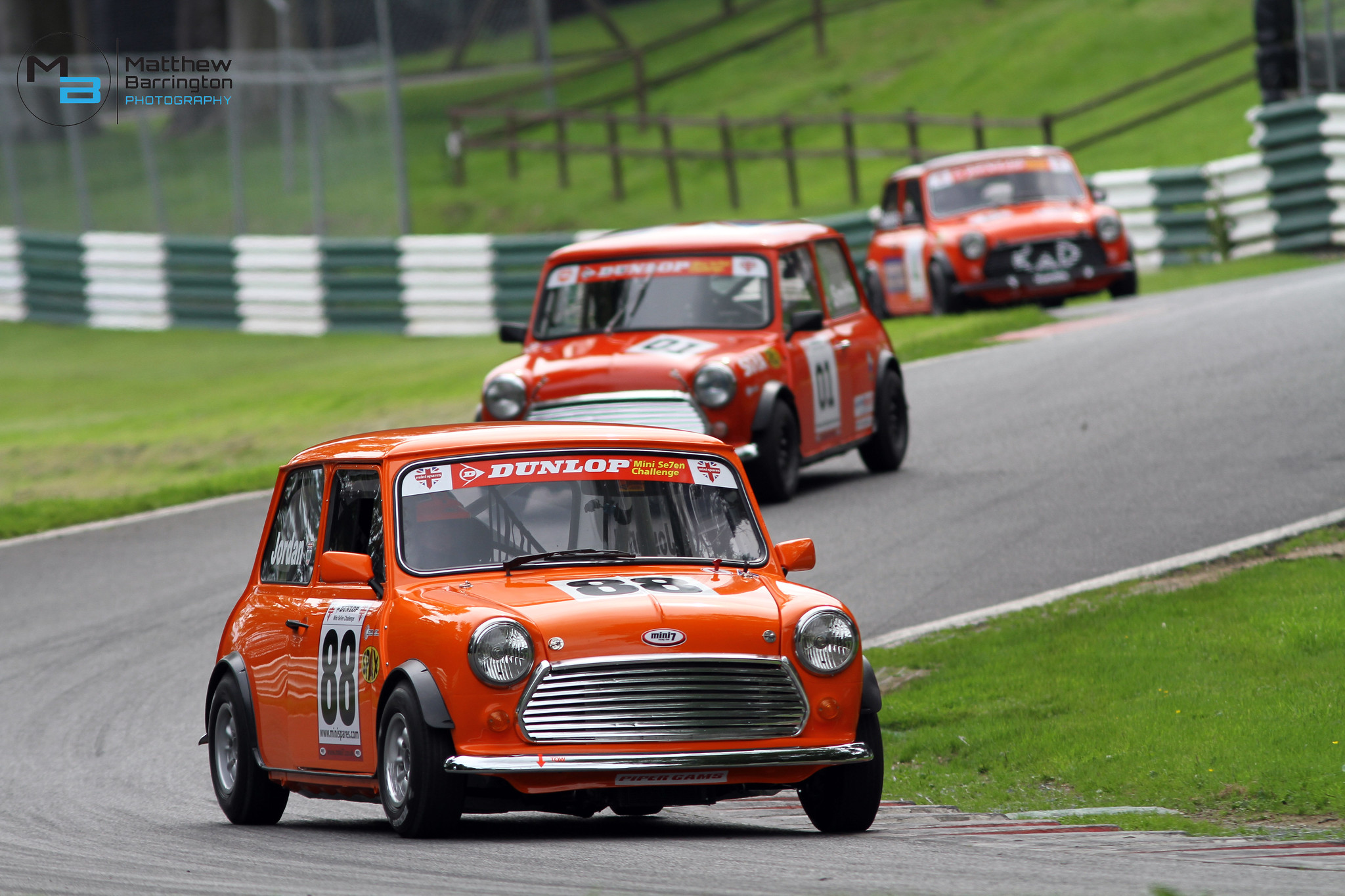 We head to Cadwell Park this weekend (21-22nd May) for rounds five and six. The Lincolnshire venue always brings out the best from the Mini 7 Racing Club roadshow, with non-stop lights-to-flag action, set against a captivating backdrop.

Three-time National champion Aaron Smith heads the points standings after four rounds, and comes to Cadwell with a win and three runner-up slots already chalked up in the 1.3-litre performance-packed class.

However, a brace of victories from twice champion Rupert Deeth reveals a mere 3-point margin, so with 20 for a win plus 1 point for fastest lap there is still loads to play for in the 16-round calendar. In third overall, former BTCC race winner Jeff Smith has moved up in formulae after three back-to-back National Se7en titles and has so far been on the pace with a brace of podium finishes.

Another former BTCC star, and the 2021 Miglia champion, Andrew Jordan scored a win in the opening Silverstone meet in March, although with Historic and Rallycross commitments as well his entry here had yet to be confirmed. Of the rest pencilled in, 2015 champion Kane Astin can be expected to challenge the leaders, as might Ashley Davies, Ben Colburn and Lewis Selby.

A double-maximum score at Snetterton last month gives Richard Colburn a clear lead in the eclectic A-Series category, his 5-porter so far proving reliable over some of the larger capacity variations.

Of these, Phil Harvey usually runs a 1380cc capacity 5-porter, indeed having won the class title on in 2018/19 seasons, while Peter Hills’ 16-valve can be quick but reliability is less certain, likewise Craig Cox’ 8-port example despite a Silverstone victory.

Margins are even closer in the M7RC’s 1.0-litre ‘Heritage’ formula – the original 850cc formula having begun as long ago as 1966! – and here it is former GT and TVR frontrunner and now leading Historic prep expert Mike Jordan who holds court by a single point over rising star Connor O’Brien, the pair dominating the podiums so far, with Jordan holding a 3-to-1 win ratio.

Spencer Wanstall and Joe Thompson are their chief rivals for overall honours, but both have recorded a DNF apiece, the former rolling spectacularly out of the lead at Silverstone in Round 2, thankfully emerging unharmed.

Despite engine gremlins early in the season, Glen Woodbridge showed at Snetterton last time out that he is another potential frontrunner with a pair of battling runs into 4th, while Jo Polley has also produced her best form to date and could well pick up another podium if those ahead falter. Look out to for Darren Thomas and Lee Roberts who could be dark horses for a high score at flagfall.

Last season’s runner-up Damien Harrington also maintains his dogged pursuit to peg the gap to 9 points, having denied Winkworth  a clean sweep by scooping a fastest lap at Silverstone.

Battling in their wake are the likes of novice Frazer Hack with a pair of 2nds last time out, along with Bens Seyfried and Butler, plus Matts Ayres and Page who are all agonisingly close to upsetting the form book. Either way, take up in the limited-tuning Scholarship formula has seen phenomenal growth in recent seasons, with a stand-alone grid scheduled for the Mini Festival meeting in August.