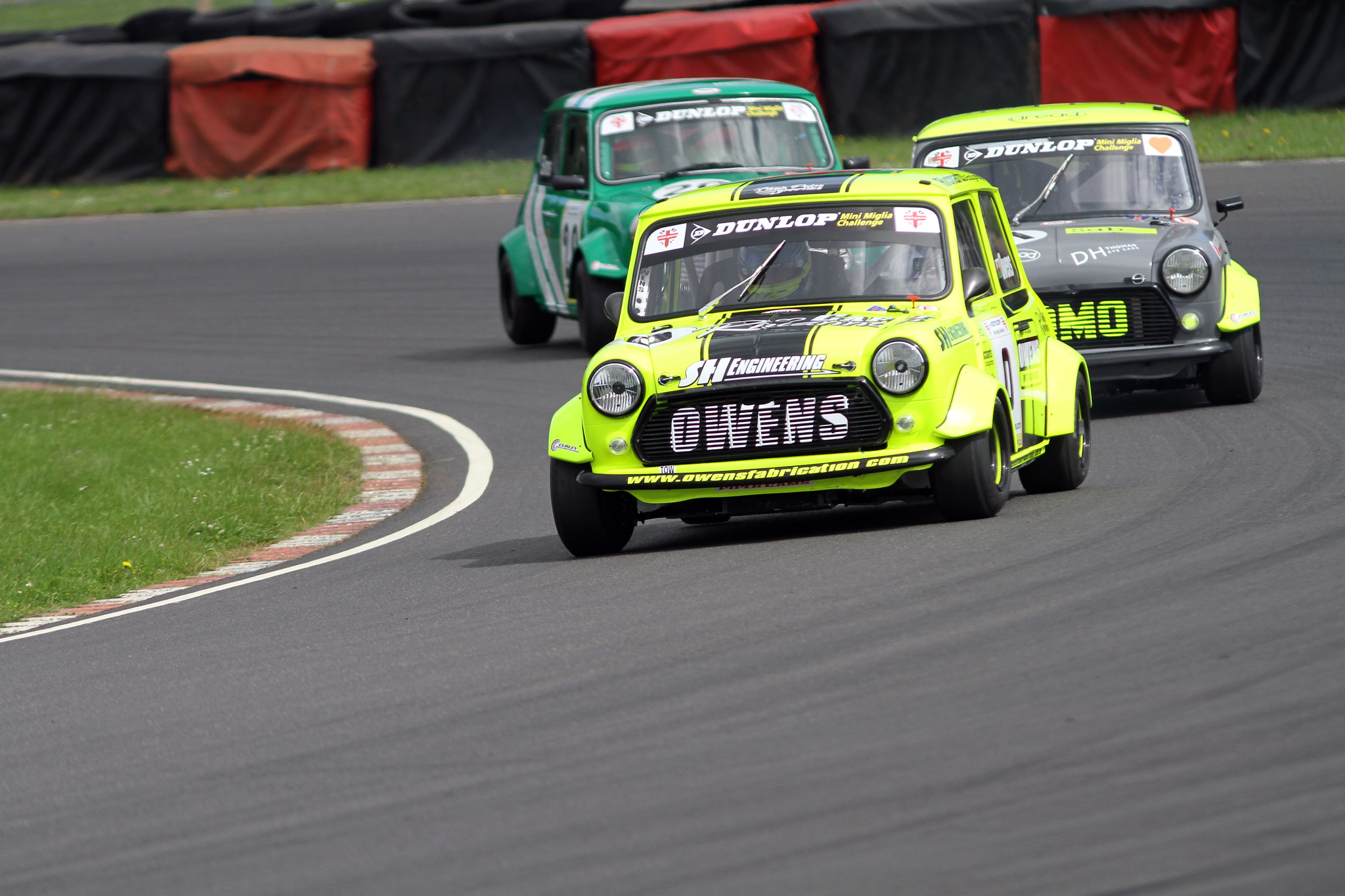 A return to Castle Combe in Wiltshire after a year’s hiatus certainly lived up to the host club’s ‘Summer Spectacular’ billing, with four excellent Mini races and a Mini grid walk served up to further treat the ice cream-toting fans

The Miglia & Libre ‘big hitters’ were first up on a gloriously sunny and hot Saturday afternoon, with reigning champion Andrew Jordan straight on the title pace despite having missed the previous two meetings. However, a red flag interlude called for a reset, but just as Jordan may have thought he had the result in the bag ahead of a train of pursuers, a clash with Rupert Deeth allowed Endaf Owens and Jeff Smith to sneak through into the top placings, with the former BTCC titleist recovering to 3rd, and Deeth in 4th with a new lap record.

Sunday dawned bright but breezier, although the 8-car lead slipstreamig battle produced plenty of action to warm the crowd up for the day, this time Jordan easing himself into prime spot when it mattered to edge out Aaron Smith, with Deeth similarly abreast of Ben Colburn.

In the Libre section Dan Lewis stroked home in front on both occasions, his 8-porter having the ‘legs’ over Richard Colburn’s 5-port example, the latter not only retaining his points lead but – along with son Ben – also having a hectic schedule by competing at Thruxton in Historics the same day!

In Saturday’s opening Mini Se7en encounter, a last-corner lunge proved the major talking point, Connor O’Brien nudging race leader Mike Jordan into a slide onto the grassy run-off at Camp which in turn gave Joe Thompson the opportunity he’d been hoping for as he nipped though on the inside to take a popular victory, with Jordan recovering to 3rd behind O’Brien.

The latter was handed a grid penalty on Sunday’s reverse grid, but within a lap or so it was the same top trio lining each other up, until the last lap when O’Brien came off worse in a bump with Jordan, coasting to a halt with a wonky front-end as the latter survived to take the chequered flag ahead of Thompson, with Jo Polley picking up the final podium placing.

With series leader Michael Winkworth absent having become a dad mid-week, there at least promised two new S-Class winners. Matt Ayres duly delivered in the first race, albeit regaining the lead during a hectic last lap as Damien Harrington’s challenge fell short after bouncing over the grass on the final corner.

Ryan Taylor was well in the mix before a broken tie-road sidelined him, leaving 3rd to Frazer Hack.

The following day it was apparent that judging the rolling restart after a safety car was key, as several cars were notably clear of the rest within a lap, Jonathan Page holding on to the lead from Neil Slark once Taylor had again departed the fray on the final tour. Even with a new lap record, Harrington was unable to close the gap despite securing 3rd in class ahead of Ayres.

Donington Park in the East Midlands beckons over the 9-10 July weekend for Rounds 9 & 10 in the Dunlop Mini Challenges supported by Mini Spares. Should be equally spectacular! ●