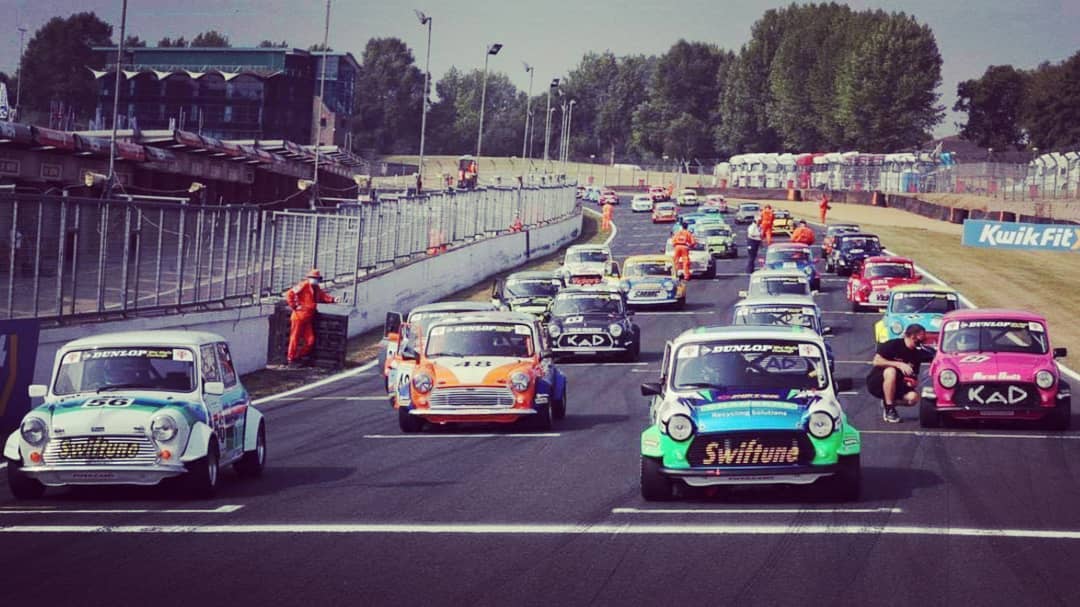 In a treble-header triumph, the Mini 7 Racing Club were once again star performers on the support bill to the British Touring Car Championship, with all three races producing sizzling performances from full-to-bursting grids.

In the top-tier Mini Miglias, local ace Aaron Smith came away with a pair of overall wins to strengthen his points lead, while on his series debut, BTCC star Andrew Jordan worked his way up the podium positions from 3rd on Saturday, through 2nd on Sunday morning before edging out Smith in the live ITV4 broadcast in the afternoon finale. Others to feature at the front included former champions Rupert Deeth, Kane Astin and Endaf Owens, along with Nick Padmore, Sam Summerhayes and Lee Deegan.

Not far behind in the Mini Libre ‘free formula’, Rob Davis eked out a series lead with a brace of class maximums, while Dan Lewis bagged the other winner’s trophy as Josh Evans and newcomer Darren Cox also accrued top-3 silverware.

Equally competitive up front were the Mini Se7ens with three different winners. Reigning champion Jeff Smith took the opener on Saturday after Max Hunter’s engine died on the last lap when poised to strike, while in Sunday morning’s safety car-interrupted race, three-time former champ’ Andrew Deviny timed his run to perfection to pip Hunter on the line, and then in the later encounter it was a similar outcome as Ross Billison nosed ahead of Spencer Wanstall to finally break his duck to record a very popular first-time victory.

S-Class honours went to Connor O’Brien in the opening race, although engine issues saw him drop out of the second and miss the third, leaving Greg Daw and Thorburn Astin to reap the rewards respectively. Ben Butler, Matt Ayres, Jonnie Kent and Ben Cutler also picked up podium finishes.

With five of the re-scheduled 2020 National calendar rounds complete, the M7RC will now head off to Snetterton in East Anglia over the 19-20 September weekend for Rounds 6 & 7. Not to be missed!

For full results details, go to Results section on www.mini7.co.uk or visit www.tsl-timing.com

For latest championship points, go to Standings section on www.mini7.co.uk