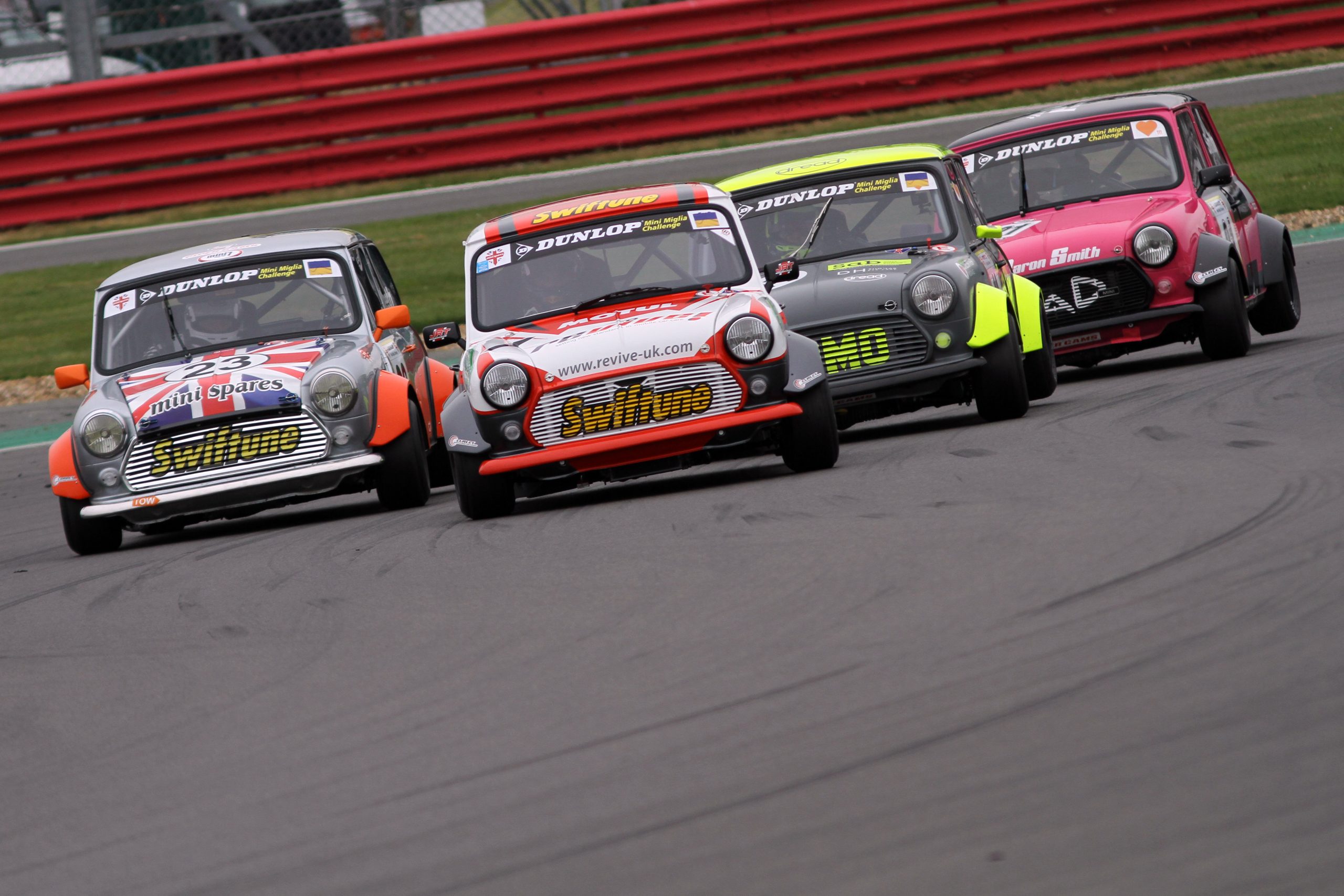 Packed grids and non-stop action were highlights of the opening Mini racing weekend at Silverstone on 26-27 March, rounds 1 & 2 in both the main Dunlop ‘National’ and also ‘0-Plate’ Winter Challenges.

Following Saturday qualifying in near-summertime conditions, Sunday morning was rather grey and cooler for the first Miglia/Libre race, but that didn’t prevent a fantastic battle among up to half-a-dozen challengers, Rupert Deeth converting his pole position into victory by a scant 0.171s margin ahead of Aaron Smith.

This pair broke clear after a yellow flag interlude, leaving Chris Morgan to lead home the rest by several seconds. In the Libre category, Dan Lewis won the duel of the 8-ports from Craig Cox.

A problem in qualifying and a delayed getaway meant reigning Champion Andrew Jordan could only recover to 4th in the opener, but he atoned for this in the afternoon run, forcing through into the lead pack to take victory by flagfall, Aaron Smith again runner-up with Deeth salvaging 3rd following a clash with Kane Astin which saw the latter in the barrier.

With a timetable delay due to early morning fog, the first Se7en/S-Class encounter actually got under way well past midday, but here the action was frenetic too.

With a class win under his belt in 2021, Mike Jordan was keen to show son Andrew the ‘old man’ has still got what it takes, and duly converted pole position into a race win, despite early yellow flags to retrieve a beached car.

Not that Connor O’Brien made it easy for him, the former S-Class titelist a mere 0.405s adrift, with Jo Polley recording her best result yet to complete the podium after Spencer Wanstall spun and Joe Thompson pulled off when both in the mix.

Carrying on from where he left off last season, S-Class title holder Michael Winkworth started from pole and led most of the way to finish 5th overall, with Damien Harrington best of the rest from Ben Seyfried once Ben Butler’s 10s jump start penalty dropped him to 5th in class.

By the final 20 min thrash, the organisers had clawed back enough time to actually be well ahead of schedule!

This didn’t seem to affect Jordan senior however, motoring through from Row 4 to ultimately a double-victory, again edging out O’Connor by a similar margin to the morning. Although the major talking point was Wanstall’s unfortunate multiple roll into the Vale chicane gravel when in a commanding lead, the driver thankfully climbing out unscathed bar dented panels and pride.

Third went to Thompson by a scant 0.604s from Polley. In S-Class, Winkworth mirrored Jordan’s feat, working his way up from the category’s 4th row to take his second win of the day – 6th overall – with Harrington edging Butler for 2nd.

Underlining the frantic pace of the opening race weekend, three new lap records were set, Jordan in Miglias, Lewis in Libres and Winkworth in S-Class.

Next stop is Snetterton in Norfolk over the 15-17 April weekend for Rounds 3 & 4 in the Dunlop Mini Challenges supported by Mini Spares. Don’t miss it! ●